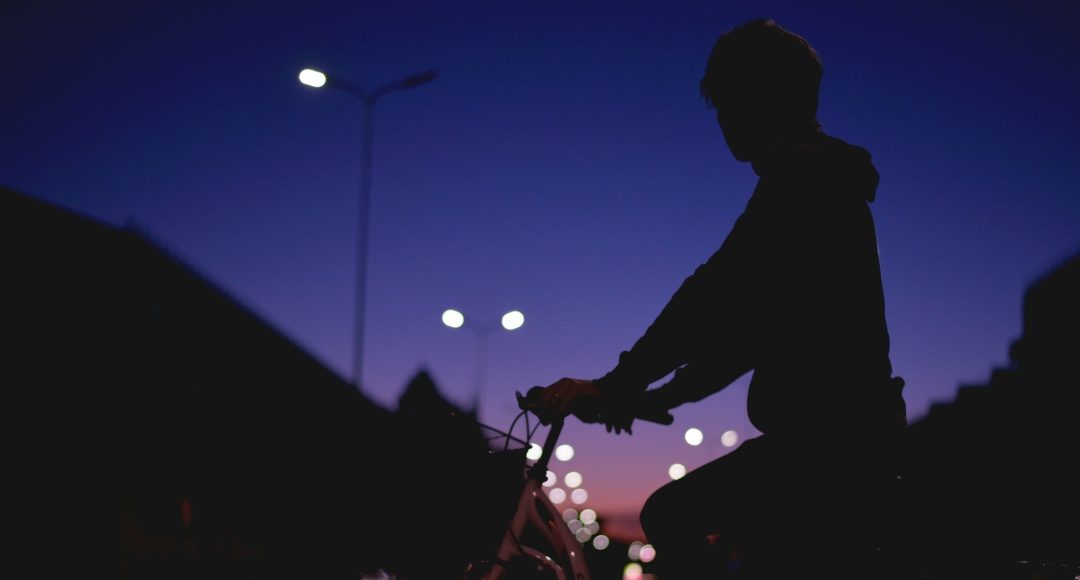 Cycling at night is often necessary for those travelling home from work, or simply for leisure purposes. Night cycling in London is becoming increasingly popular with commuters, opting to use a more environmentally friendly mode of transport. Night cycling does however come with its challenges, this article will provide all you need to know about the cycling at night law, and other things to consider when cycling in the dark.

Cycling at night does come with some legal requirements. The cycling at night law is generally centred around eradicating the possibility of accidents and the responsibility of bicycle owners in the event of an accident. This means ensuring visibility, and sticking to dedicated cycle lanes or to the side of the road.

Cyclists are legally required to have lights on both the front and back of their bicycles. The front lamp must be a white lamp that conforms to the BS6102/3 or an equivalent EC standard. The lamp must be front facing, up to 150 cm from the ground. If the lamp is only capable of producing a flashing light, it must be rated at a minimum of 4 candela.

For the rear lamp, the light must be red to differentiate between the front and back of the bicycle. It should ideally be positioned centrally at the back of the bicycle, between 35cm and 150cm from the ground. As with the front light, it must be BS3648, or BS6102/3 compliant, or be the equivalent EC standard. If the back lamp is only capable of producing a flashing light, it must be rated to a minimum of 4 candela.

Clothing is a key consideration when cycling in the dark, what you choose to wear can really affect the visibility of your presence to other road users. Dark clothing is not recommended as it blends in with the night’s darkness. Instead cyclists are urged to wear bright colours such as yellow, orange, or green. Neon colours are ideal as these are better in terms of visibility at night. Most cycling or active wear brands will have a range of bright coloured clothing specifically for cycling at night. Some cyclists also opt for hi-visibility clothing which often has light reflectors on, this type of clothing is ideal for night cycling.

A perfect addition to an often dark coloured backpack, is our Hi Vis Backpack Cover which as well as protecting your bag contents from wet weather, it offers 6 bright LED lights and reflective tape to help get you seen on dark winter nights.

It is also essential to ensure your visibility isn’t just restricted to the front or back of your bicycle. Cyclists should focus on complete visibility from all angles, so other road users are made more aware of your presence even when viewing you side on, which is often the case when approaching a junction.

Clothing is not the only issue, you should also ensure that your bicycle itself is also visible from all angles. This includes using lights and reflectors to promote full visibility 360 degrees around you.

Body lights are another great option that let road users know where you are. Cyclists are urged to make themselves as visible as possible, body lights help to differentiate between the cyclist and the bicycle itself which is really useful for other road users to prevent accidents. Body lights should not be too bright however, to avoid dazzling other road users.

Visibility is not only restricted to the torso, legs, or bicycle itself, hands and arms play a huge part in road cycling so their visibility shouldn’t be neglected. Signalling if often the only way that cyclists can communicate their predetermined actions to other road users, therefore having the hands and arms fully visible is key. This means opting for clothing options that highlight the arms and hands, for example a long sleeved hi visibility top. Additionally, cyclists may wish to wear gloves that are either brightly coloured or reflective.

Cyclists road positioning is key, by sticking to specified cycle lanes, cyclists do not only avoid accidents but they also avoid any responsibility in the event of an accident.

Drivers however, are instructed by the Highway Code (Rule 163) to give cyclists ‘at least as much room as a car’ when overtaking. This is critical and gives cyclists the right to position themselves away from parked cars and prevent ‘dooring’ where a parked vehicles occupant opens the door into the path of a cyclist. This type of incident has a higher chance of happening at night with the poor visibility, so make sure you’re seen and position yourself well to prevent problems.

Choosing the right bike for cycling at night is essential. This means looking for features such as the ability to attach lights and reflectors. Some bicycles will already have reflectors attached to them, often on the front and back and on the spokes of the wheels. The colour of the bicycle is also something to consider if riding at night is the primary use, for example some bicycles will be painted with specialist neon or reflective paints. The paint or finish on the bike can have a great effect on the visibility of the bike itself, it is therefore recommended to avoid frames that are black or other darker colours. Matt finishes may look cool but they’re not ideal for night riding due to the lack of reflection they provide.

Maintenance is paramount in all kinds of cycling regardless of whether the bicycle is used at night or not. In addition to the regular maintenance associated with cycling, cyclists should ensure that the bike is always ‘night ready’. This means maintaining any visibility devices such as lights or reflectors and making sure that they are both functioning correctly and sitting where they should. It is therefore recommended that checks are done each day before riding at night. Additionally, if the cycle lamps are rechargeable, always ensure that the battery is holding sufficient charge to make the journey.

Most cyclists will carry back-up equipment with them, but there are more considerations when riding at night. For example, night cyclists should carry spare batteries if their lamps are battery operated. It is also a good idea to carry a back up set of lamps in the event of a malfunction. Furthermore, if the main set of lamps are rechargeable, carrying a back up set powered by changeable batteries is recommended. Night cyclists may also wish to carry a hi-visibility vest with them in the bottom of a bag, in the event that they may forget suitable clothing.

An issue that can arise when night riding is cyclists not being aware of the beam distance of their lamps in relation to their speed. Not being aware of this can be potentially dangerous as it can disorientate other road users. It is therefore recommended that when choosing a cycle lamp, cyclists choose one with a sufficient beam distance. The beam distance also plays a part in how far cyclists will be able to see objects in front of them. This is where being aware of speed, beam distance and reaction time come in, for example if a cyclist cannot see an object or obstruction until it is too late for them to respond and use their brakes, then they will often collide with it. This means it is vital that you ensure the speed you are travelling, and the amount you can see in front of you gives you enough time to react in the event of a potential accident.

Being vigilant is very important when riding at night, although you may take all steps to ensure visibility, accidents do still happen. It is therefore recommended that cyclists are always fully aware of their surroundings, meaning being aware of both visual and audible queues. Often cyclists will wear headphones, which makes the combination of listening to Queen’s ‘Bicycle Race’ and peddling as fast as possible to beat the lights exciting, but it’s not a good idea at night, or when riding on roads in general! Wearing headphones can mean that the sounds of engines, horns or other potential signals may be missed, and if you cannot hear them, then it could result in an unplanned visit to A and E, and nobody needs that.

Knowing your route is another way of ensuring a safe ride at night. By knowing where particular cycle lanes are and having a sense of familiarity regarding the route you will be less likely to make dangerous manoeuvres. Always try to plan routes based on the number of cycle lanes, volumes of traffic, and areas that are well lit at night.

Safety in numbers is particularly relevant when it comes to riding at night. Joining a cycling group will increase your visibility massively, groups of cyclists are a lot easier to spot than individual cyclists. Although this may not be possible when commuting back from work, it’s not uncommon to see cyclists gather at junctions and remain together along stretches of road, so it can be wise to join the group.

Those cycling for leisure can find groups specialising in night cycling in London, and throughout other areas of the UK, there’s even an annual charity bike ride in London you can join.

The most important thing is to enjoy it, cycling at night can be a very pleasant experience and although you should be aware of the safety side, always have fun. Whether you are commuting or riding in a leisure group, cycling is great for fitness and wellbeing, not to mention more friendly to the environment.